The gusts are enough to throw an average sized person – or penguin – to the snow-packed ground. Your best hope is to put your back to the wind, bend your knees and tough it out.

The good news: the katabatic winds don’t last long, and we resume tromping along the packed “people paths” in search of photo opps.

We’re south now of 60 degrees – solidly in Antarctic waters and the forbidding, otherworldly surrounds that seem like some other planet. Greenland and Alaska seemed more hospitable than this jagged panorama of upthrust black stone crusted with ice; in those other rugged places, man has divined a way to co-exist with conditions. In Antarctica, only a handful of research stations operate year-round; anyone who has “overwintered” is a tough soul indeed. 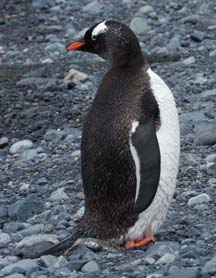 As visitors aboard Lindblad Expeditions / National Geographic’s Explorer, we’re doing well just to untangle our camera gear – tomorrow we’ll carry less – pull ourselves from the occasional two-foot plunge through the snow pack (a stark reminder to  stick to the “people path”) and troop around the rookery of chinstrap penguins. We’re following the rules and keeping at 15-foot distance between us and the birds, but the birds seem to have missing the memo and occasionally waddle over to check us out.

The  black-and-white birds are as comical as a cartoon. Flippers flapping, they waddle until they belly-flop into the snow. Or better yet, the sea; its here that they fly, spinning through the ocean in watery flocks. It’s nesting season; no chicks for another week or so, but a bird still has to eat.

In this world, images don’t quite do the trick. But we’re giving this, literally a best shots, with the help of the expedition’s photo team. At each point of interest – near the Weddell seals at one end of the island, by the rookery on the ridge – a photographer answers questions and helps with camera settings while making sure none of the our fellow travelers gets too close to the birds.

We’re luck to have the landing at all, we learn. Our experienced team include a delightfully humorous German captain and an American expedition leader making her 121st voyage here. Thanks to their long experience and careful watch of ice and wind charts, they’ve steered us to sheltered bay where the winds allow us to go ashore. We learn this at the daily briefing, where the next day’s plans have been completely rewritten by high winds and a season of tough ice.