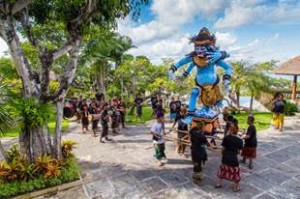 Regardless of your political stance, you may be feeling a bit like Jon Stewart at his recent Stephen Colbert show appearance:  Tired and bedeviled by the pace of 2017.

The island of Bali — one of my personal favorite places, once you get off the tourist track — may have the antidote. On the eve of the Hindu New Year, villages island-wide parade through the streets hoisting giant effigies of mythical monsters. The New Year’s Eve pageantry — this year, March 27 — is meant to draw out the demons. The next day, the island goes silent in an attempt to trick the evil spirits into thinking the place is moribund so they’ll go away.

five-star Balinese resort. I’ve been in Bali during other festivals — including a glorious midnight march up a cliff in moonlight, followed by a mock battle to chase away hostilities. But I’ve never been to Nyepi, as the new year is called. Maybe this should be the year.